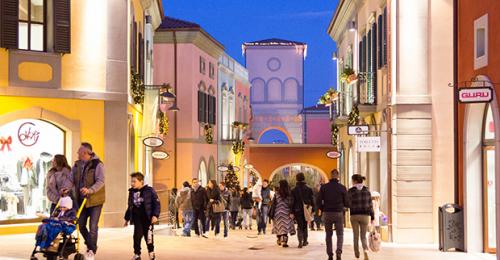 First factory outlet center of Abruzzo and of the central Adriatic Coast, the Città Sant’Angelo Village will be developed in two phases, reaching a total of 130 shops, 30.000 smq of commercial surface and 2.500 parking places. The plan of the Village has taken in account the marvellous landscape and the vicinity of both the mountains and the seaside, while architetural design is inspired by the traditional local villages and the modern american «lifestyle concept». In fact the presence of broad living space, comprehensive services, restaurants and bars improves and prolongs the time that visitors spend inside the Village.

The Città Sant’Angelo Village is visible from the Autostrada A14 Bologna-Bari and its position can be considered commercially strategical.The Village is only at 1 km of distance from the «Pescara Nord-Città Sant’Angelo» exit of Motorway A14, the most important route of the Adriatic Coast, a route that is also easily linked to the A24 and A25 Motorways.From the accessibility point of view the area is central in the Abruzzo Region and the route system makes it easily reachable from a vast territory, extended from Romagna in the North to Puglia in the South and to Lazio in the West.Every year 30 millions of vehicles move along the Motorways A14, A24 and A25. Rich and modern towns such as Chieti, Teramo, Pescara, L’Aquila, Ascoli Piceno, Ancona, Macerata are at less than one hour drive from the Village.The Village will attract the great number of tourists visiting every year the Abruzzo Region, famous for its elegant seaside resorts, the ski slopes of Gran Sasso and Maiella, the National Parks of Gran Sasso-Monti della Laga, Maiella and Abruzzo, Molise and Lazio.The Porto Marina of Pescara is constantly growing in importance for its links with Croatia (Split and Kvar), while the promising International Abruzzo Airport is located at less than 3 km from Pescara.